It's Friday again :)  I'm so looking forward to getting to work on some of my projects this weekend.  I try really hard to work on my projects during the week when Honey Do is at work and Newton is at school.  When my schedule and routine are interrupted, I have to work on the weekends.  Fortunately for me, my projects are all personal and not reliant on deadlines and income.  I greatly admire the bloggers that earn a living from their crafts, it's not the easiest jobs they'll ever have.  But it is greatly satisfying to share your creativity, and not just as an income.

So on to my projects. This 10 oz. skein of cotton yarn is almost done.  I've been making dish rags and decided to use the whole thing and trimming in a varigated cotton for finishing. 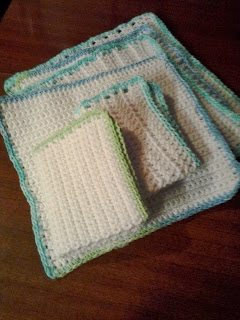 I managed to get a half dozen out of the large skein of white cotton and the small skein of variegated blue/green.

Saturday morning began with a quick run for odds and ends for the weekend.  We had a snow storm come in from the south-west.  It snowed all day long and by evening we had 3 or 4 inches.  The forecast is for us to 6 inches.  I made turkey enchiladas for dinner, using up the leftover turkey from thanksgiving.  I like to fix anything that can be a casserole or in the crock pot :)  Once the kitchen and laundry were under control, I worked on the tea towels. Making progress :) 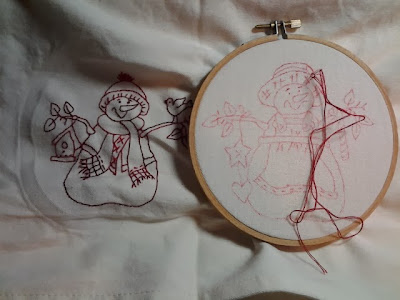 While I stitched I watched a movie:  After Earth.  It stars Will Smith and his son Jaden Smith.  Young Smith is becoming a very good actor.  He puts in a stellar performance.  He is definitely worth keeping and eye on for future films.  This movie isn't for everyone, but I enjoyed it.

Our weather forecast was accurate.  Here's how we ended up on Sunday morning: 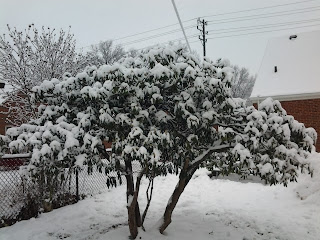 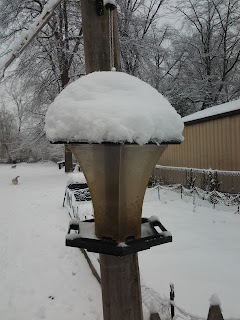 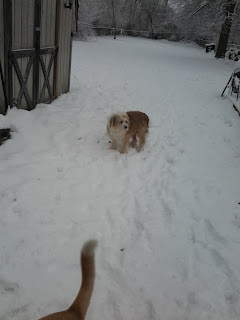 We got about four inches total.  I'm really hoping that the weather holds out and we have a white Christmas.  We haven't had any really good snows in quite a few years.

After church, I fixed lunch for Honey Do and Newton, caught up the dishes and headed to the "studio".  My goal is to get the majority of the Christmas gifts done this week and I have limited time to do it.  Three of the five days are already taken with other obligations, so time is a fleeting commodity.

So I managed to get something accomplished.  So excited: 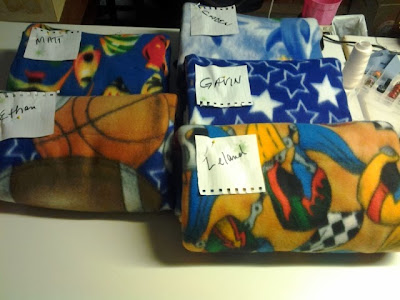 These are all fleece "sacks".  Rather than tie them I sewed a bottom and side seam and hemmed the tops.  The "ties" would have made the sacks virtually useless because there were such huge gaps between them.  These are for the great nephews between the ages of 4 and 10.  I also had an extra one that I made up for Newton. 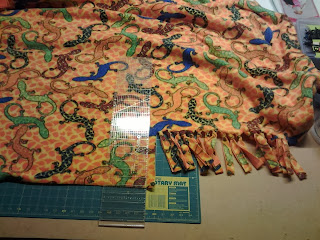 The two older "greats" will get doubled, tied fleece blankets.  I managed to get this one done, too.  I still have one more to complete and that will be done sometime on Monday.  Very pleased with my accomplishments today.

I hope you all had a productive, but still restful weekend.  I promise myself every year that I won't leave things for the last minute, but I never seem to quite get it.  I'm going to spend some time after the holidays making lists and plans for gifts for next year so that I'm not spending all of December panicking about what's not done.  And it's not just time.  Stressing the budget isn't working for me either.