We've had a major shift in temperatures this week. After some rain over the weekend, temperatures dropped down into the 60s and stayed overcast with threatening skies that through Wednesday hadn't produced any rain. The forecast for next week is in the 90s !!!

Wednesday began with stitching on the sheep. 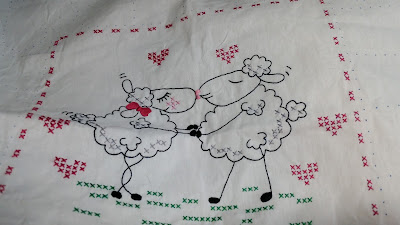 I put away the supplies from the Easter wall hanging project. I left it on the quilt rack so I can show it to Mom when she comes on Thursday. She was very excited to hear that I had finally finished it.

After morning chores, I put in my sewing time on the blocks for the Lace Cabins. 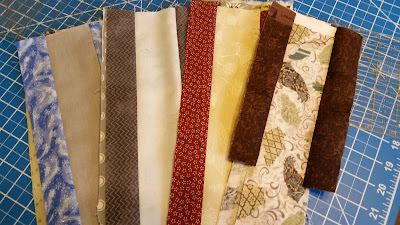 Wednesday afternoon I took some time to clean and reorganize a closet and small cabinet and pack up some more things for the donations pick up Monday.

After Newton got home from school, we went to the library. He listened to music and played video games. I checked emails, read some blogs and played on Pinterest - this something I rarely do these days unless I'm looking for something specific. We grabbed dinner on the way home and relaxed.

After dinner would be spent finishing the binding on the Redwork quilt. 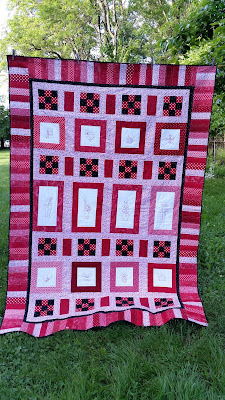 And we are officially done :)
I have mixed emotions about being finished because I've spent so much time working on it, but I am absolutely thrilled with the end results.

Moving on to the next UFO - the Lace Cabins from Crabapple Hill. I started this last fall. These were actually large blocks and I have chosen not to cut them down in an effort to make the quilt larger. That means adjusting how the quilt will be finished, so I won't be using the suggested finish in the pattern :) Always the rebel :) I designed a new layout - my version.

Evening spent as so many have been lately, working on the sheep stitchery.

Thursday dawned with another quilt pushing its way to the forefront of my brain:  The Teacups Quilt, another one from Crabapple Hill. 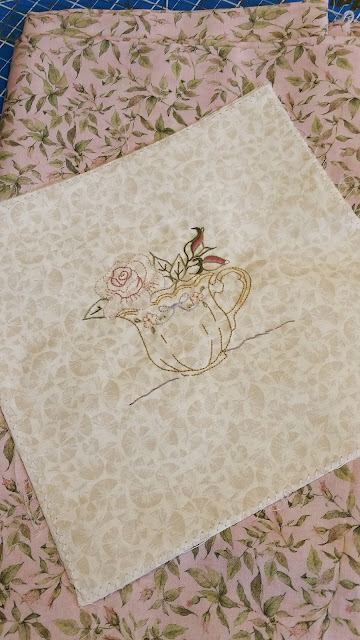 I can't remember how long ago I finished the stitching on these The other day when I was at Pat Catan's I say a gorgeous floral line that called to me and said it was right for this project. And the reason I felt so were the pink buds in this particular block. 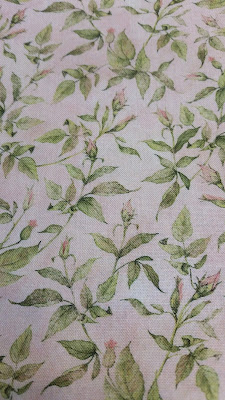 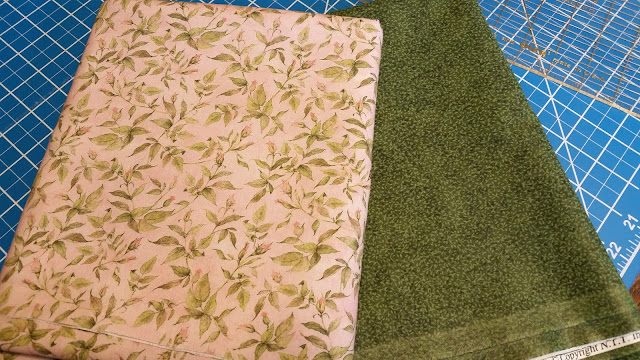 I, again, wanted a different layout from the suggested finish. 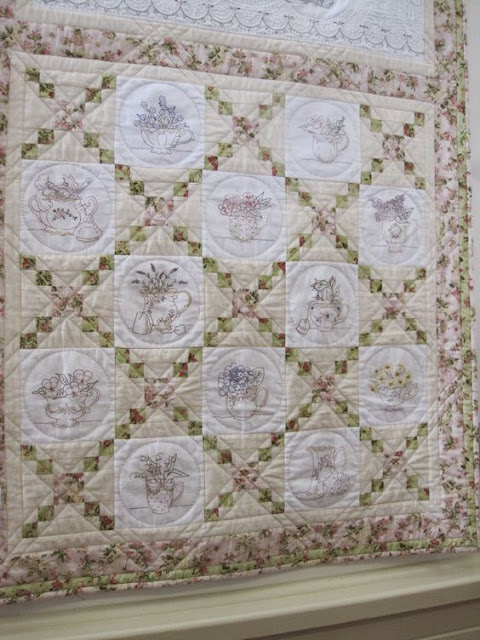 When I first saw this a number of years ago, I didn't think I had the ability to do this type of finish. At that time, I was just stitching and putting things away. It was not actually on my radar to finish a quilt. Since then, I've made a few and feel a little more confident to not only begin this, but to actually finish it. The alternate blocks are only using two fabrics and that's where my rose print and green come in. I still have to stitch the header, that may be my next stitching project :)

While I was out purchasing my fabric, I stopped at the local discount store. It's my favorite place, besides Amazon, to purchase books. 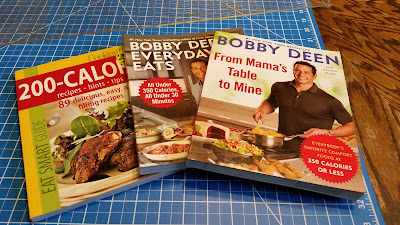 I spent the rest of the afternoon working at the sewing machine. I'm really liking setting aside at least 30 minutes of sewing each day. I can't get over how much I'm getting accomplished and prioritizing.

Wishing you days filled with creativity and productivity.
Posted by e at 6:35 AM