I promised myself that I would be more productive in the sewing room this year after an extended hiatus. Since getting involved in quilting, embroidery and blogging several years ago, I haven't been very many days without doing something until we moved about a year and a half ago. And I wasn't prepared for losing all interest.

However, since getting back into my sewing room, I have discovered that the time away was actually good for me. I'm not as interested in starting new projects, although I have done some, as I am in finishing what I have already begun.

My first example of that is Crazy Quilting. Pintangle has a beautiful new project starting this year. I was going to do that, but instead decided to finish the one I started several years ago. To that end, here is where I am so far: 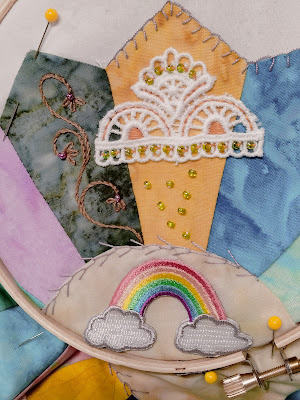 Not a lot of progress, but I'm at least moving forward. I also promised myself that I would work on one section of the dresden plate every day. Starting late in January.

Next up, I worked on the Woolie Gnomes. My sister and I are doing these together and decided we could do the stitching on our own. Together we chose wools, cut out all the pieces, and assembled the blocks. We divided this on in halves, working first on the tree house. Over the weekend we will assemble the gnome itself. 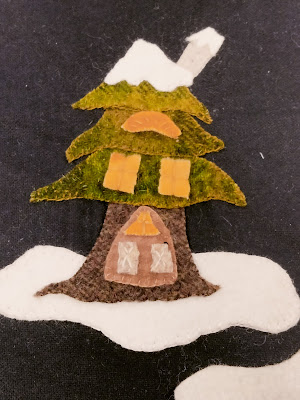 After the gnome block, I finished putting together the baby quilt I've been planning to do for this month. 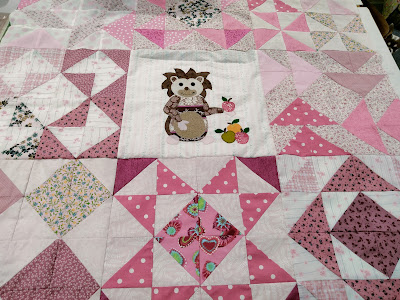 The hedgehog in the center is a free block of the month from Pumpkin Patch Patterns. The blocks I used around it are from the color block challenge. This month was pink, but I made these a couple of years ago and never did anything with them. So now it's a new baby quilt. I'm hoping to quilt it next week.

Last but not least, the baby afghan I've been working on. 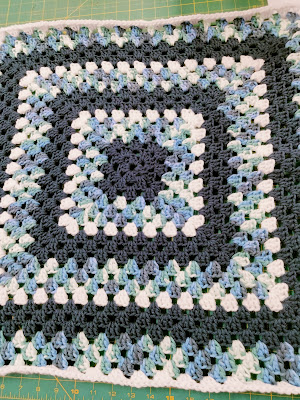 This should be done within the next week.

Very happy with today's progress. Clink the button at the top to see what all the other participants have been accomplishing.

Wow, you were productive! I love the way you did the TAST for the week. I know that takes time, and your curves look so good. The gnome blocks are going to be great, and I will be sad I didn't do them with you, but there's only so much time, and less energy that I would wish these days. I love the baby quilt! That came out fabulous!

Glad to see you are having a great time being back in your sewing room. You've accomplished a lot!

Really lovely projects, it's definitely nice to finish things off from time to time.