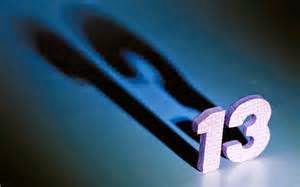 I absolutely hated - with a purple passion, hated being 13. And it's for all the reasons we should - hormones, you're too old to be a kid, too young to be an adult, awkwardness, tall, gangly, thin. Clothes don't fit right; what does, doesn't seem to be fashionable. I got in so much trouble for rolling my eyes every time my parents said something, anything !!

And now, I'm the parent of a 13 year old. I was too absorbed in my own teenage angst to remember what my brother was going through, but I do remember he was always getting into trouble. In a nutshell, that's my 13 year old son. We have had a year of pretty much nothing but problems. This weekend was no exception. So both Honey Do and I are exhausted. Emotionally. Physically. Spiritually. I love my son. Hope and pray that someday he'll make better choices and pray even harder that the choices he's making now will not forever impact his life. God is in control. I have to sit back and let it be HIS time. As a parent, you either want to fix everything or try and figure out a way to make it all go away. Unfortunately for me, I can't have either options. It's out of my hands so I can't fix it and there is absolutely no way to make these situations go away.

I am no more in love with 13 this time around than I was the first time.

The weekend was blissfully productive. I did a variety of things and that always helps me. The stress of some of the things we are currently experiencing made Monday and Tuesday a little less productive. However, having said that, I still feel I'm in forward motion.

The last few days, I've been working on Block 8 of Bethlehem. This is a pretty decent size block. 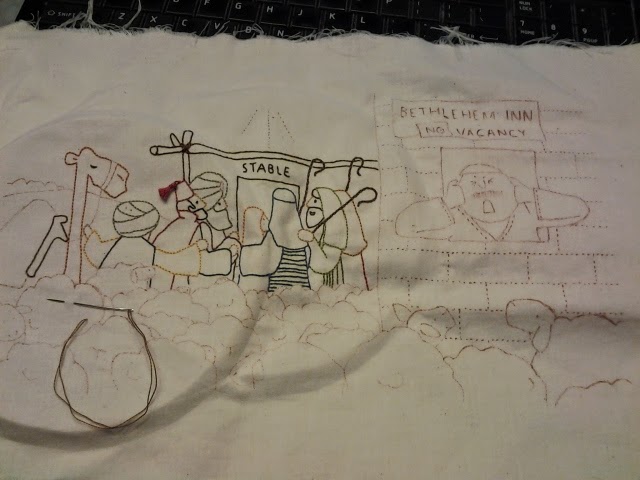 I've decided it up in thirds. The Innkeeper is one, the sheep are two, 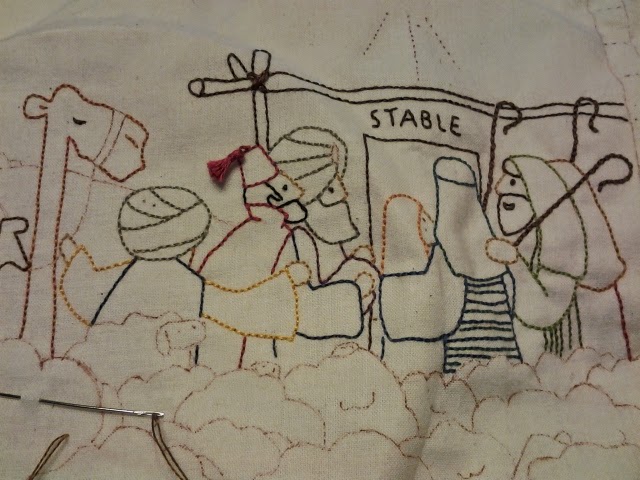 and the shepherds and wisemen are three. This "third" is almost finished.
Pleased with how it's coming along. 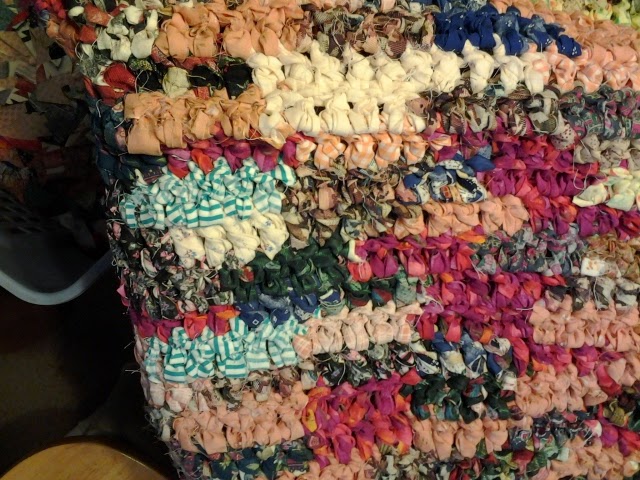 I've made some noticeable progress on the second rag rug. This is a really good in-between project. It doesn't require any decision making and just goes along until I decide to work on something else. 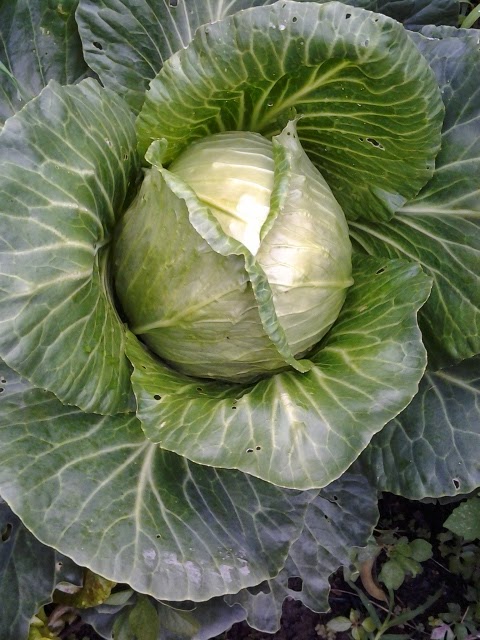 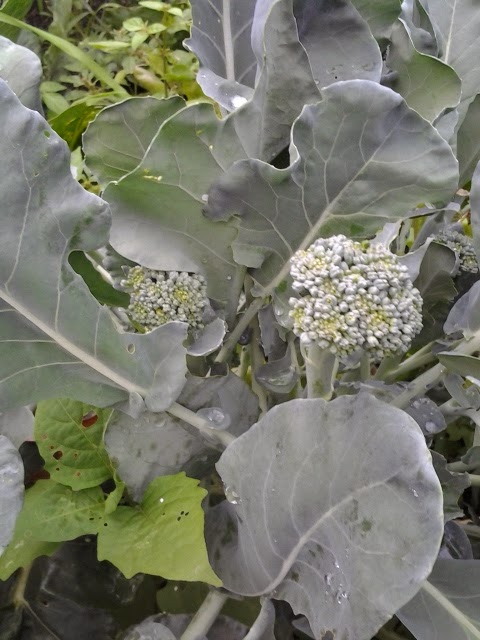 Isn't this the prettiest cabbage you've ever seen. I know, I'm strange, but when you put so much time and effort in anything, you want to see good results. Last year's garden was so disappointing because I wasn't proactive with the deer. This year, I've worked a little hard to keep my efforts safe. This cabbage is almost ready, so I'm going to have to come up with a way to preserve it for winter. I have three more. This is a good problem to have.

Broccoli is doing well. I've been harvesting every few days and putting it in the freezer. We'll have it over the winter.

There are lots of green tomatoes, so I'll be putting up juice and making sauces. 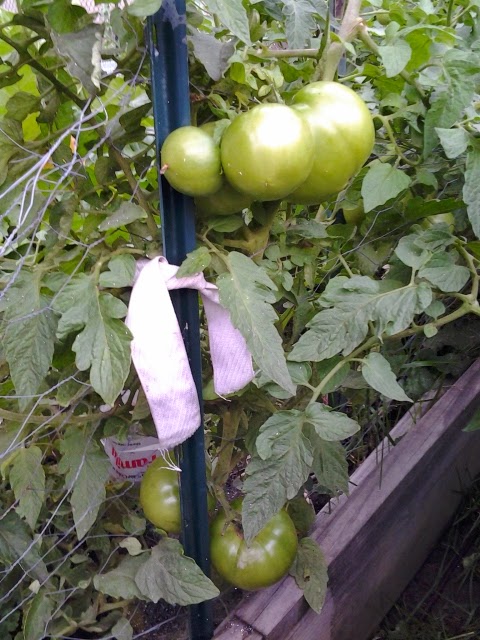 Rhubarb is doing fantastic - that's being shared with BFF and mom. I don't care for it. Not sure about Honey Do, I'll have to check :) 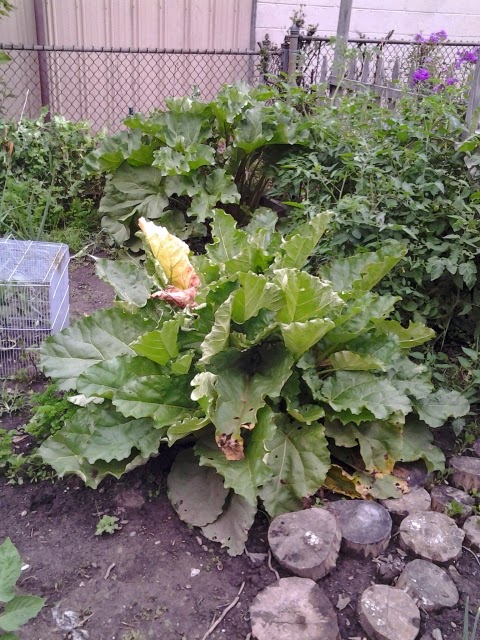 The plants are HUGE this year. I spread them out into three last year, but only two survived. I'm amazed at how much they've grown. It will be a bumper crop to share.

I got brave and uncovered the zucchini tonight. I hope the deer leave them alone. 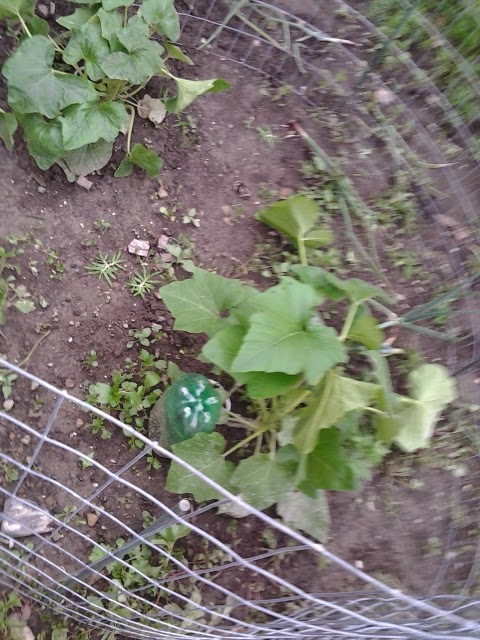 BFF shared some fencing with me earlier in the year and I've put it up as a "corral" around the plants. I'm hoping it's close enough to deter the deer from eating them.

One final project today. It's how I started my day. 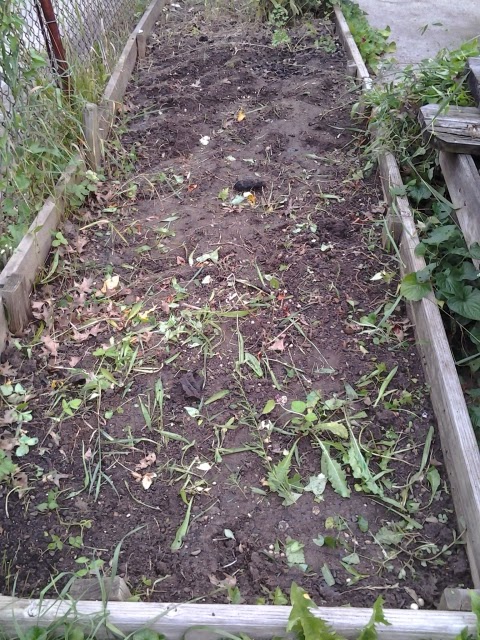 A week ago you couldn't see the ground of this little plot because it was covered in weeds and poison ivy. The 3x6 foot plot started as my "vegetable garden" five or six years ago. Honey Do spent a Saturday putting up the boards and prepping the plot for planting. I had peas, tomatoes, zucchini, peppers and parsley. Since them, it's been my herb garden, except the only "herbs" growing are parsley, sage, weeds and poison ivy !!! The parsley have self seeded, the sage is a perennial, the weeds and ivy are trying to take over. I have to be very careful since in the last few years I've developed an aversion to the ivy and had a bout of it earlier in the spring that took quite a while to relieve myself of it. So this little plot isn't looking all that pretty at the moment and the worst is the foreground, that's where the ivy is and I'm going to have to figure out a way to rid my little plot of it. I spent an hour this morning getting as much of the debris out as I could. I'll keep working on it and getting it cleaned up and ready for next spring.

Thank you so much for stopping by,

Wishing you a creative, productive day.

That is a gorgeous cabbage! I wouldn't want to get tangled with that poison ivy either, but the rest of the pictures are appealing. =) I was not crazy about 13. I was a freshman in high school, and everyone seemed more of everything than I was. =) I was not fond of it with either of my boys, either. All I can say is that they do get older eventually. Keep up with your stitching and stress relief. =)

Thank you, Susan. My garden is producing, so I have no complaints.
I think kids getting older is like the size and expense of their toys - without being too negative - their problems get bigger and so do their attitudes :(
Yup - stitching is my handle on reality and sanity :) Thanks for your attempt to keep me positive. It is greatly and gratefully apprciated :)