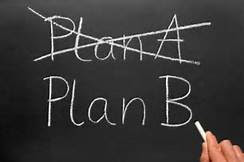 Mom called Wednesday evening and changed plans for Thursday. It's all good. We took care of Newton's physical, which took two and a half hours !! The doctor is very thorough and we found out that he can see Newton into adulthood. There won't have to be any transition to a new doctor when he turns 18 years old.

My day started late with the appointment and errands. Here's what I got accomplished:

Sheep/Patchwork hearts - four to finish assembling
Everything was pressed and all sewn together.
Next step, quilting the blocks. It took what was left of the day, plus interruptions to get them done.

Friday . . . Let me start out by saying there are just not enough hours in this day !!
I had seven stops to make. It took all morning !! Two were fun stops. First was the library. 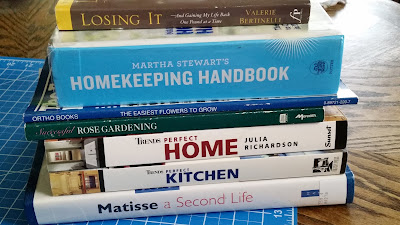 Lots of new reading material. I found all of these on the discontinued shelves. I love that the library does this. It only costs me a little time and a dollar for hard covered books and fifty cents for soft.

The second was my local quilt shop - the one that is only five minutes up the street and I don't frequent often or I would go broke.
My motivation was to get another Row by Row design, but this shop isn't participating this year. It's the second shop I've gone to that isn't participating. But I didn't waste the trip :) 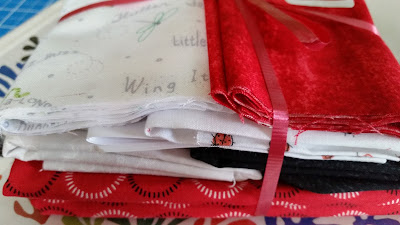 This sweet little bundle is going to make a ladybug wall hanging. I just couldn't resist and to sweeten the deal I had credit for frequent shopping (not that I go all that often) and it ended up at around $15 !!! I was absolutely thrilled :)
And more sweetness, they are working on the same design with a bumble bee - yes, I signed up for that one.

The only sewing I accomplished on Friday was to piece the backing for the DOD Patriotic quilt. 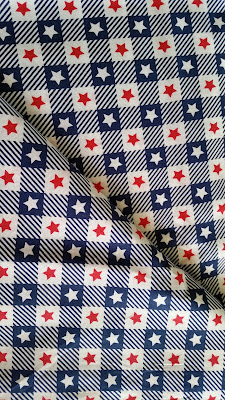 It was 60 inches wide and 60% off when I purchased it. A great find. Now to sandwich and it will be ready for quilting. This top is all assembled, so I may have no choice but to put it on the rack - if I ever get the house quilt finished.

Isn't the week flying?
Saturday was supposed to be cooler, but the cold front didn't feel like it came through. By noon the first load of laundry was on the line. The sky had cleared and there was a nice breeze. By 5 p.m. all the laundry was washed and dried.

Lately, I've been "shopping" a lot of healthy meals cookbooks. Here's a few of my recent favorites. 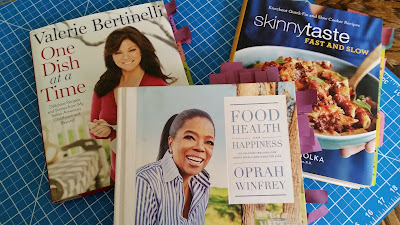 I have a really hard time committing recipes to memory and use the books for meal planning (as you can see from all the tabs hanging on the sides and tops). I do so much better with a plan, not just for being prepared but also for unnecessary purchases. I've done better adding more fresh fruits and vegetables, especially vegetables. I borrow most of the titles from the library and if I decide I really like them, I order on line. I've found some good, reputable titles at the local discount and dollar stores, too.

Saturday afternoon was spent working on my Christmas in July goals. 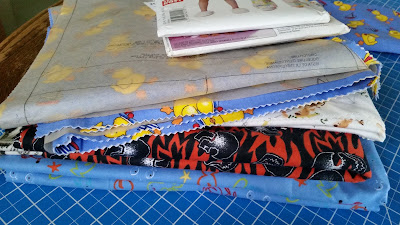 Seven of nine pairs of pajamas have been cut out. This pretty much wipes out my stash of flannel. And that's OK. As the kids hit about 13 years old, I'll start giving them money and they can save toward something they want. Bigger pieces of leftover flannel will go in a bin and saved for scrap flannel quilts. Smaller pieces will go in another bin and be used as stuffing for dog beds for the local animal shelter. That should cut down on my need to not waste anything. I have fleece that was donated to my church that hasn't been used yet. I'll use that for the pillows. Once I get that made, I can just put the scraps right in and fill as I go. Makes them washable and warm. And I finally feel like I've found a project I can get behind.

Wishing you days filled with creativity.