Tuesday ended up being much more productive than I could have hoped.

After Bible study, I stopped at JoAnn's for a piece of white Kona cotton. I've decided to embroider the centers of my I LOVE HOME BOM from Jacquelynne Steves. I cut out the centers after Rocky and I returned from our walk, I started laundry and did some more sorting/purging in the basement :) 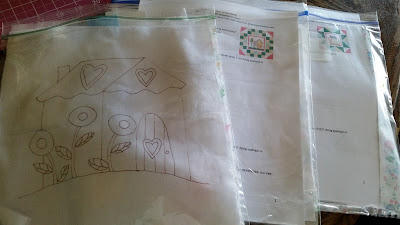 Not only that, I got all three drawn off and threads pulled. My second goal of the week is finished.

I've been telling you that Honey Do was busy with international visitors the last couple of days - the visit went very well. Sunday I cut up a beef roast and put it in the crockpot to make goulash. The house smelled wonderful and the meat slow cooked tender and tasty.

While I was playing on Pinterest I found a bunch of German recipes, dishes I grew up from Mom's kitchen. They especially caught my attention because the blog had "Oma" in the title. "Oma" is German, maybe European, for grandmother. We called my Hungarian grandmother (Dad's mom) "Oma". I never knew my German grandmother (Mom's mom). My Oma passed away almost 40 years ago and my grandmother passed when I was just a toddler. My nieces call Mom "Oma".

Since I don't remember my German Oma, Mom is my inspiration for all things home-y and especially German and is responsible for my appreciation of my heritage. We all have things in our heritage that makes us ansious and not proud of where we come from. Grace and maturity help us to see beyond the history. My parents are/were honest, hard-working, respectable people and responsible in large part for the person I've become.

Anyway, a while I was playing on Pinterest I found a recipe for spaetzle with goulash :) 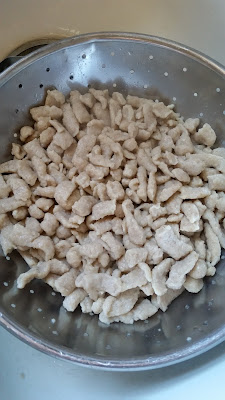 I made my very first batch of spaetzle !!!
They are a little on the brown side because I incorporate wheat flour with the all purpose white flour, but they were very tasty. I feel like I do my heritage proud when I make something that tastes like it came from Mom's kitchen :) 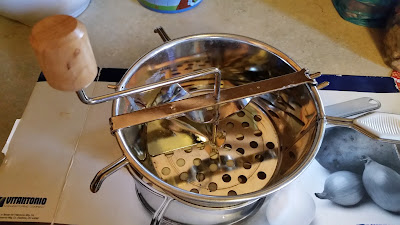 And because Mom doesn't cook as much any more, she gift me with her spaetzle mill :) I'm a lucky girl :)

Wednesday after an appointment and finally going grocery shopping, I spent some time at church working on Pam's quilt. 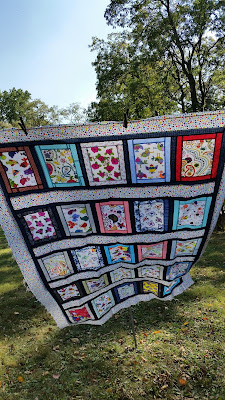 Laying it out on a couple of long conference tables made it really easy to sandwich and pin baste. I can spend the rest of the week tying it and getting the binding on.

Wednesday afternoon was spent putting groceries away while I made dinner, reorganized my overflow pantry in the basement and did more laundry. I have a tendency when I'm overwhelmed or short on time to just put things where ever there is an empty space. Very quickly, clutter takes over. It's difficult to see what I have when I'm that disorganized. I'm also getting rid of things I know I'll never use again. Most things are going in a box for donations and not in the trash.

After dinner, I put on a pot of vegetable scraps for make stock. Again the house smelled really good. Honey Do kept going in the kitchen :) Using up scraps from fresh vegetables makes a really tasty stock from things that either end up in the compost bin or trash. It's also a way of using things up before they go bad. I have a container that I keep in my freezer just for scraps. I keep things like the ends of onions, parsley stems, celery leaves, etc. When it's full, I make stock. Then I bag it in quart freezer bags because they will lay nice and flat, in two cup increments and I have them whenever I need stock.

I spent the evening make my menu for next week. I won't see Mom this week, so I'll be in the kitchen on Thursday making more zucchini bread :)

All caught up with you now - pretty pretty quilt Edith, and I love your art quilt! Take me right to the ocean. My heritage is Irish, and they're not known for food, lol, so I'm a wee bit jealous of your cooking.