Monday was the last leaders' meeting for Bible study. It was a morning of mixed emotions. We're excited about the summer break, anticipation for the study of Romans beginning in September, new members, new groups and for many, myself included, sadness because we won't be returning to leadership. It was a difficult decision but my responsibilities needed to be re-evaluated and therefore, I won't be a children's leader next year. I will still have some responsibilities for service but not as demanding (for lack of a better descriptive word).

Monday afternoon was quiet and fairly unproductive. I didn't really have time to work on my quilt, so I chose another UFO - a Tilda doll that I had begun several years ago. 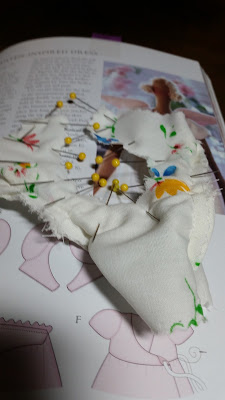 This pile of pins and fabric are the bodice of Tilda's "Jane Austin" dress, which you can see in the background photo. It took longer to pin pieces into place than it did to actually sew it together. 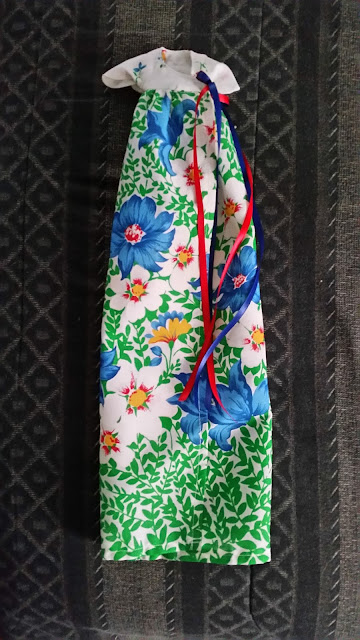 And this is her finished dress.

The fabric was a border print piece that I received when Aunt Rose passed away. I still have a fairly decent size piece left. Not sure what I'll do with it, but I absolutely love the print and bright colors.

I still need to finish the doll's body, although most of the parts are sewn together so will just required stuffing, final assembly and then things like hair and face. Wish I would have kept track of how much time it took to do this project from start to finish. I can tell you that it's not for the faint with all those little pieces. This is why I refused to make Barbie doll clothes :)

I'm reading Romans right now - love it. I'm glad you're taking more time for you - I don't think I could cope with the children's classes anymore, I don't have the energy. Love the Tilda dress, can't wait to see the finish!

Always good to have the wardrobe ready for a doll's birth. =) Gorgeous little dress. I know the sadness that comes from being released from a responsibility, but something else will come along to take it's place, and you still have the actual Bible study to do. Glad you got your 30 minutes in!