1.
an act or instance of failing or proving unsuccessful; lack of success . . .

Not quite accurate from my perspective.

You see, I don't always feel that failure is unsuccessful. I see it as an excuse, or better still, a reason to try again using what you learned on your first attempt. 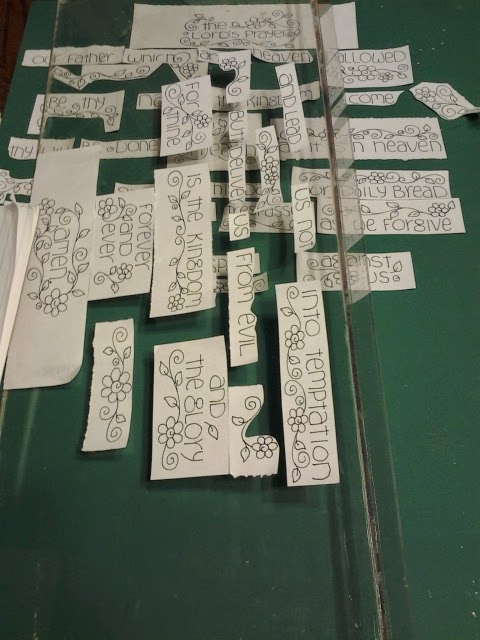 These are the pieces of pattern that I painstakingly cut to size, laid out on a cutting board and re-assembled on my livingroom window to draw off on a piece of white-on-white printed cotton.

It took me the better part of Wednesday to do that. Only to feel like something wasn't quite right or missing, but I continued until I finished it. By early evening, the pattern was all drawn off on a healthy fat quarter.

But that feeling just didn't go away. So I pulled the original pattern and double checked and sure enough - one section was missing. I failed to print it and didn't catch it until I had put all that time into it.

Upon further reflection, I'd decided that I didn't really care for the way it turned out, so I'm back to the drawing board and will try to figure out a different way to transfer this design than my first attempt.

I feel like I have learned something and will move on to make other choices and decisions to accomplish my goal. In the meantime, I'm going to work on the patteern as it was originally published and ponder my next steps for how I want to move forward.

Failure is just a word - it doesn't define me or my abilities.

Wishing you a day filled with creativity.
Posted by e at 6:36 PM

So why can't you just print out the missed part and trace that and keep going with all the pieces? Or if it's a stitchery, just stitch what you traced and call it good. =)