I allowed myself a lazy weekend.  Honey Do and I celebrated our 14th (!!!!!) wedding anniversary.  It is so hard to believe so much time has gone by.  It doesn't even seem possible.

I started planning for the weekend on Friday - I made egg muffins with sausage and cheese.  That way I wouldn't have to make breakfast and we can have any leftovers during the week.  I did some grocery shopping and made a crock pot of green pea soup with ham hocks.  Boy does that hit the spot in these really cold temperatures we're living with lately (we went from 60 on Thursday to 32 Friday). 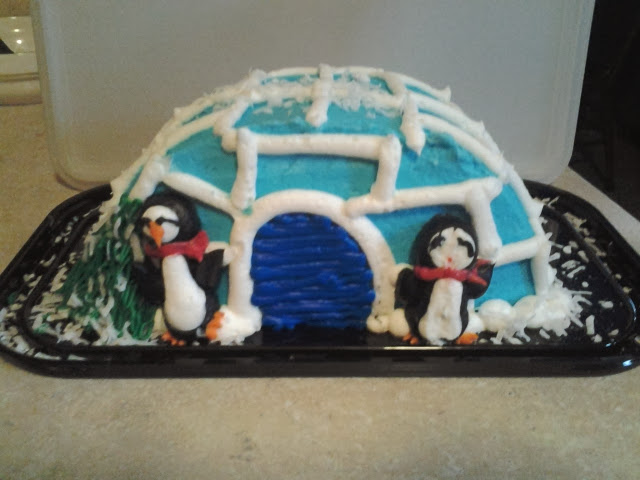 I don't know if you could tell how much I like penquins.  Always have, as long as I can remember.  Well, I found this adorable little cake in the bakery of our local grocery.  Just had to have it. 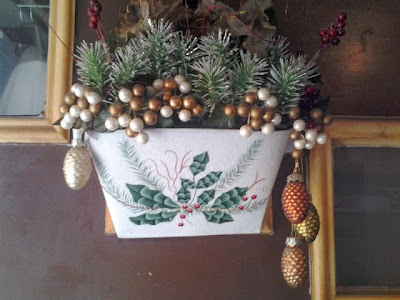 I made this arrangement several years ago, but it still makes me happy, I put it on my back door. 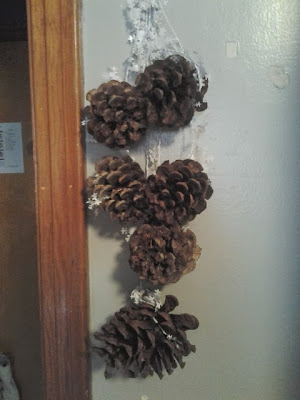 Earlier this week, I purchased a bag of cinnamon scented pine cones.  I saw a post on Pinterest that had them assembled using ribbon.  I had some wired snowflakes and hung this in my kitchen.  I put the rest in a basket in my living room, so I can smell them wherever I am in my home.  Love the smell of cinnamon. 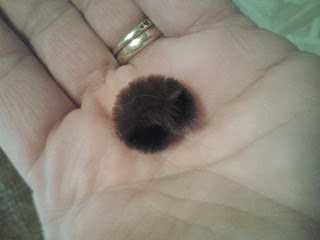 While I was getting Christmas decorations out and putting Halloween away, I found a woolly bear (caterpillar) in my house.  It's too cold to put him outside, so I put him in one of my plants.  I hope he survives the winter. 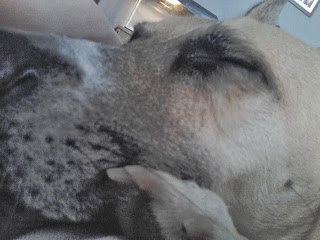 We found some snuggle time too.  Taz is a definite snuggler :)  He makes his intentions known without a doubt.  He'll lay with me for awhile and when he gets warm enough, he finds somewhere else to lay.  Honey Do and I went to visit the County Kennel.  I'm debating getting another dog.  A young one, one that will play with Taz.  Some company for Taz, the girls are both old and really don't play anymore. I thought we had one chosen.  We spent quite a bit of time playing with him.  He even looked a lot like Taz.  But we ended up decided that we weren't sure now is the right time.  It's amazing how much quieter my house is with one less.  We've noticed definite personality changes in the dogs we have left, but not sure we want to mess with them again.  So we're going to take our time.  There are plenty of pets that need homes, living in shelters and kennels.  We always rescue, we never go to the pet stores and buy from the puppy factories.  We don't have to make this decision today. . .

Happy anniversary! I love your cake! That pine cone thing is a great decorating idea. It took me forever for my eyes to make sense of that last picture of Taz. LOL

Sorry about the Taz picture. He was laying next to me on the lazyboy chair - so it's a really close-up of him. He's my shadow most of the time. Thanks for the wishes.